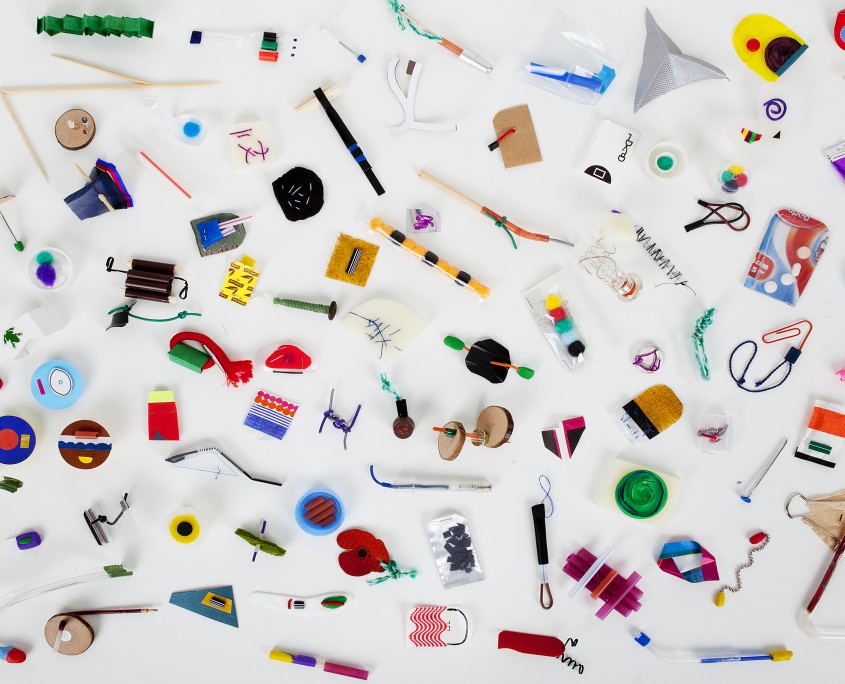 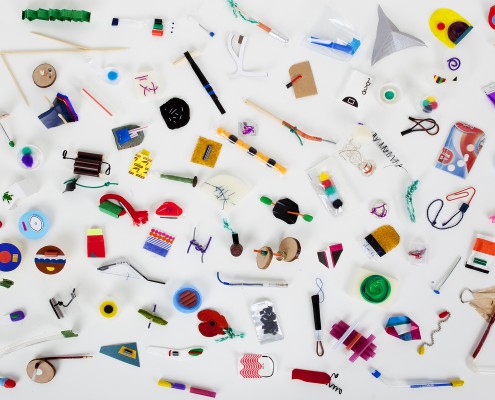 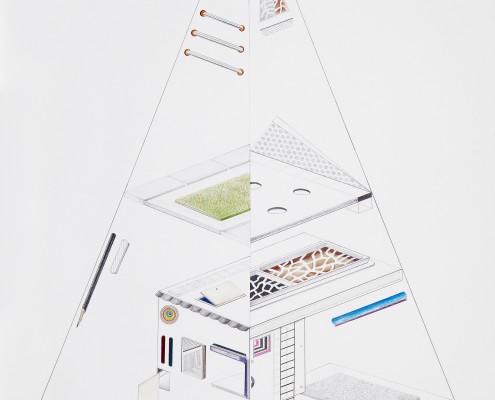 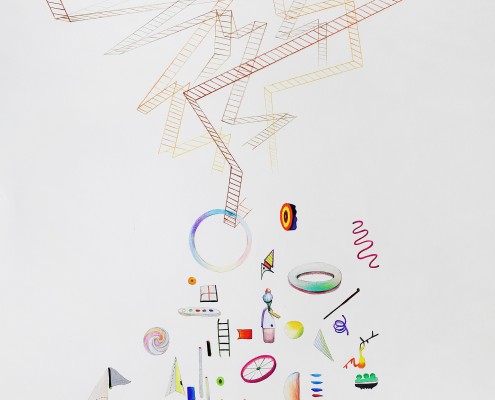 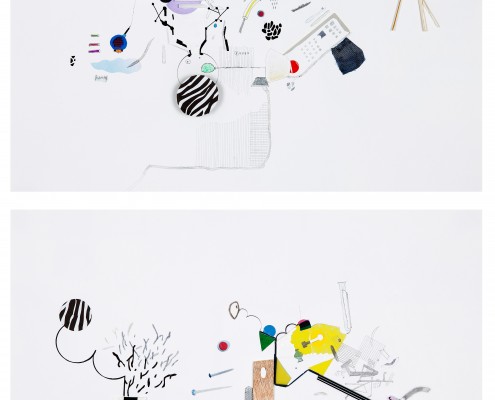 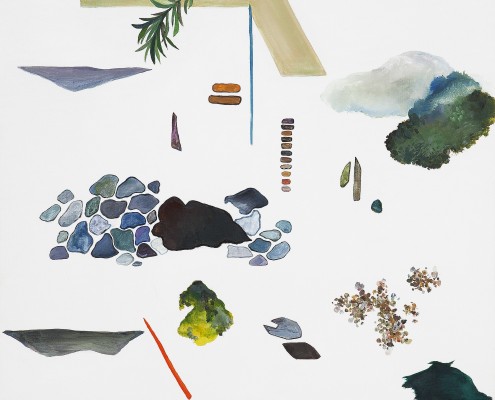 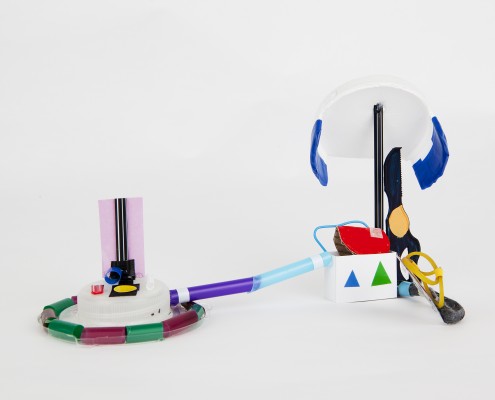 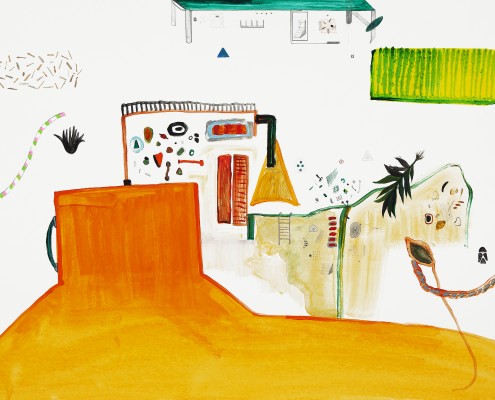 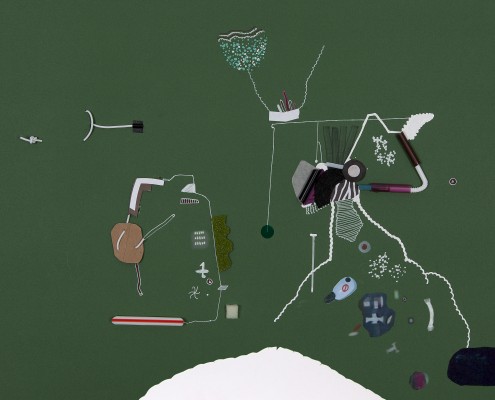 Since I was young, I have had a habit of drawing random images of what I see. During a solitary moment, I enjoyed drawing things with a pen and those images had been piled up in my drawing books. Currently, I have over 20 drawing books.

I’m an only daughter. Because both of my parents worked, I had lots of time to be alone, and I had gradually accustomed to it. I was alone after school or academy and even during supper. Sometimes people show sympathy, thinking that I must have been so lonely. However, after leading such a quiet life for over 20 years, now I am strongly repulsed by unnecessary fuss around me or people’s attention. Despite the passing of many years, various noises around me are still awkward to me.

In particular, I hate to look a person in the eyes. The eyes of other people scare me. When making eye contact with a person, I feel fear or dizziness, and my eyes tremble and my mind goes blank. So I can’t maintain eye contact and avoid looking people in the eyes. As this happens over and over again, my behavior has been misread, and I needed a solution.

So I pretend to look a person in the eyes but gaze somewhere else. For example, I pretend to maintain eye contact but I actually look between a person’s nose and the upper lip, giving him the impression that I actively communicate with him, and this method enables me to face the person comfortably. Yet, I may succeed in facing the person but cannot enjoy intimate conversations. It’s because I’m still confused. I may hear his voice and random words but can’t hear the complete sentences. The sole fact that I’m facing someone deprives me of my perceptive abilities.

Why do I fear people?

Why do people think they can have sincere or intimate conversations only when they keep eye contact?

<The reason why I’m interested in the unmet gaze>

When I move my gaze somewhere else instead of maintaining eye contact with a person, I get to have a view of a different, incomplete world. I see the view partly hidden by the person’s face, a shadow of a geometric pattern created by light, and details of an object that I don’t usually recognize. In most cases, I don’t remember a person’s face because I don’t look at his face. My gaze is focused on anything except for his eyes.

This repeated diversion of gaze has completely changed the way I see things. Instead of looking at the overall outline of an object, I may stare at a screw fixed to the edge of the object. Instead of looking at a tree as a whole, I may stare at a stalk of a leaf. At one point, I began to focus on part of something, not the whole of it. Such diversion may repeatedly occur because I feel uneasy even when I’m alone, perhaps supposing that someone might be looking at me. And this unmet gaze has been expressed as a drawing on paper. Most people recognize space as it is. They see the view as a whole. But I tend to see a geometric image or a pattern, fragmented again and again. Naturally, I have developed interest in the gaze different from that of others.

In this way, my work is created based on my own way of seeing things and space, as I rebuild the entire image of the world I perceive. This can be my own codes. Umberto Eco, an Italian semiotician, defines a symbol as a means of communication for both a sender and a receiver (or decoder). Likewise, a drawing can be my own means of communication, and the images of the drawing my own symbol or code.

The image of unmet gaze is described in the drawing book in details. The image of the subway, for example shows the view when I was sitting in the subway car. The view that appears to me is different from the actual view of the subway car. One woman on the seat is touching her mobile phone. Many people are seated in the car. But to me, only the woman is seen, especially the heel of her shoes, the handle grips, and the round-shaped lump of metal right next to the door. I only see sharp, geometric shapes. This original view is soon expressed as a drawing and eventually developed into various works.

Such a drawing on kent paper is recreated as a 3D object. It may be expressed as a compressed shape of the drawing or rearranged as a small 5-cm miniature. I select some impressive views I obtain while walking around in Seoul and collect materials on the spot for my work. For instance, I used straws or paper napkins obtained in a coffee house or even plastic bag found on the street. Sometime I make materials to express the view more fully. In most cases, the objet was created according to the drawing. Occasionally, an impressive view is made into an installation without drawing, which is interesting to me because such change in the process produces a different result. For example, when I change a drawing into an object, the color, texture, and other aspects of the objet are very similar to those of the drawing. However, when I develop a view into an object directly, it is much freer than a drawing in terms of shapes. In addition, the texture and 3D effects tend to stand out more in comparison with a drawing. I find these intriguing aspects of 3D structure and space very appealing.

I enjoy being alone and lying in my room like Hikikomori (reclusiveperson). Lying on my couch and basking in sunlight makes me feel so peaceful like a worm that wants photosynthesis. This makes me want to discover a new inner person within me through a performance of becoming a worm. One day, I made a piece of clothing which looked like a worm and ran to a park. I needed something that can block the gaze of other people. And the performance began extemporaneously on the grass. Because the clothing was made of translucent plastic, I could not see anything. Just like when I take off my glasses in my room. Like I freely bask in sunlight on the couch at home, I became a worm freely rolling on the grass. Likewise, my room was my own world in which even a small incident could develop into a play like the worm performance. I created my own language and recorded it. And I began to communicate with this world through somewhat awkward performances such as looking for a friend in a thicket. The work of unmet gaze started in this small space of my room. At first, it seemed to be confined in terms of space and size, but now the change in the direction of my gaze, toward the world, seems interesting. Now I’m eager to see things outside my room, my house, and even my country. I’m ready to communicate with the world through my work.

This summer Germany experienced a terrible flood. I felt speechless when I looked at the pictures in which the villages were flooded by the record-breaking heavy rain. Soon, however, I began to see the upper parts of the buildings above the water, which looked like a drawing. A part of a house and a few branches of a tree above the water just looked like the view I usually see through the unmet gaze. Suddenly, I wondered what geometric patterns would appear if other places are flooded. My curiosity about space was stimulated by the pictures, and I wanted to work on the gaze which may occur because of a flood and on the unmet gaze as well. I wondered what would follow the drawings, 3D, and performance. Currently, I’m making a video of the unmet gaze. An actual view is re-created on paper and, any change in the gaze between objects is expressed in a video. I’m keenly interested in the dramatic changes of the gaze and the effects created by them. I’m working on a large number of objects to be connected and operated as a machine because I really wonder what those objects would produce in the settings. I’d like to do away with the modern stereotype that a machine should be useful by creating a useless one.

In addition, I want to experience work in which compression of gaze (e.g. part of a view is restructured as space as a whole) is expressed as a map or a code through encoding.

Likewise, I’m very used to see the world in a different point of view and greatly affected by John Berg. I want to communicate with the world not just through my works but also through media of other fields.

Lastly, I’m very interested in the politics and social issues because I believe that an artist should recognize things happening in his time and express his voice accordingly just like a politician. It’s amazing that an artist can express his opinions in various ways. However, many Asian countries including China apply strict standards and judgment of laws to artists. It is sad that an artist, who should be the freest human being, lives in such a world. Hence, I’d like to study in a country that guarantees freedom and welcomes communications. And later I want to contribute to making this world a better place for artists so that they can be properly respected.